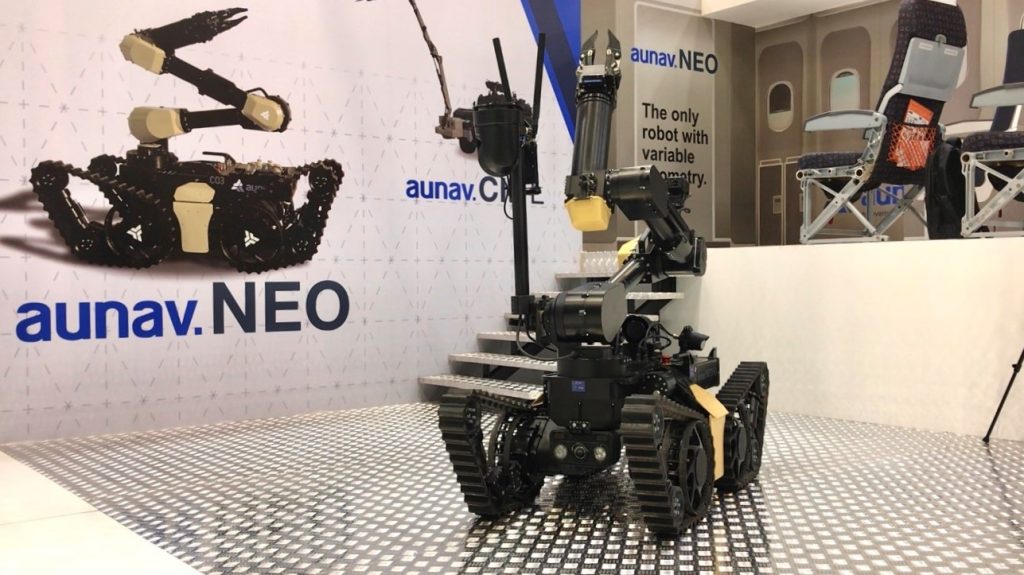 aunav, an international benchmark in robotic solutions development for Defence and Security, will present the aunav.NEO robot for the first time in Europe within the coming weeks. It will be at two important events in the sector: MILIPOL, which will be held from the19th to the 22nd of October in Paris, and FEINDEF, from the 3rd to the 5th of November in Madrid.

It will be the first opportunity to see live demonstrations of the UGV (Unmanned Ground Vehicle) on this continent. It had made a very impressive first appearance earlier this year at the IDEX show in Abu Dhabi, garnering immense excitement with spectators.

At IDEX, aunav had recreated the interior of an aircraft specifically to showcase the aunav.NEO’s ability to access narrow spaces like the aisle of an aircraft, all thanks to its variable geometry system. This unique technology allows the robot to increase or decrease its width during missions to adapt to any situation. At the French MILIPOL and the Spanish FEINDEF, aunav will once again offer this demonstration to attendees.

Designed and manufactured by aunav at its Binéfar (Spain) facilities the aunav.NEO is a finalist in the MILIPOL Innovation Awards, in the category ‘Drone & anti-drone systems, robotics’, the winners will be announced on the 19th of October. It has also been recognised as one of the ‘100 best ideas of 2021’ in Spain by El Mundo and Actualidad Económica, which underscores the invaluable innovative work aunav invested in developing this product.

aunav’s latest development, the aunav.NEO, offers essential technological innovations that not only makes it the most advanced but also the lightest in the company’s robotic solutions range. It is an exceedingly versatile UGV as it successfully integrates variable geometry with capabilities rarely combined into a single product.

One example is its platform self-stabilisation, allowing the robot to maintain a horizontal position when climbing stairs, ramps or traversing uneven terrain. Another is its Plug & Play system, which automatically detects and configures any accessory in real-time without requiring operator intervention. Its modularity is also worth mentioning, which allows the system to be easily dismantled for ease of transport or allows for modified configurations.

The aunav.NEO robot’s first presentation in Europe at MILIPOL and FEINDEF

The aunav.NEO, the only explosive ordnance disposal robot with variable geometry, to be exhibited at MILIPOL (Paris) from the 19th to the 22nd of October and at FEINDEF (Madrid) from the 3rd...

aunav has supplied to an active counter-terrorism unit in Thailand with seven aunav.NEXT robots and seven aunav.VAN command and control vehicles. The robots, designed and manufactured in Spain, will help neutralize threats...