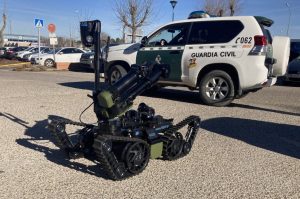 The Spanish Guardia Civil has recently incorporated two units of the aunav.NEO explosives deactivation robot, destined for the Explosives Deactivation and CBRN Defence Service (SEDEX). Manufactured at aunav’s facilities in Aragón, Spain, the platforms will be used in international peace missions involving members of the Guardia Civil.

The aunav.NEO is the latest and most advanced development from aunav, a brand specialised in robotic solutions for Defence and Security. It is unique on the market with its variable geometry system, making it possible to increase and decrease the width of the robot during missions to adapt to different operating environments. It is also the lightest and most versatile model in the company’s line-up.

Each of the units supplied to the Guardia Civil includes a UGV (Unmanned Ground Vehicle) platform, an articulated robotic arm, vision and communications modules and the company’s new portable control unit, the aunav.ROCS, which has significantly reduced its weight and dimensions compared to previous devices. The robot is prepared for handling suspicious packages and opening and accessing different types of vehicles.

¨We have been working with the TEDAX of the Guardia Civil for two decades, and we are very proud of their continued reliance on our products”, said Pablo Vázquez, general director of aunav, who stressed that “we consider our Security Forces and Corps’ trust in us to be aunav’s most valuable asset”.

Specifically with regards to the aunav.NEO, Pablo Vázquez highlighted “its great versatility and the important technological leap it represents. It’s the result of aunav’s extensive experience in explosive deactivation and robotic engineering, as well as the close work with customers to improve our products”.

The robots will be used by the Guardia Civil’s Explosives Deactivation and CBRN Defence Service (SEDEX) during international peace missions. The aunav.NEO is designed and manufactured exclusively in aunav’s facilities...

The aunav.NEO robot’s first presentation in Europe at MILIPOL and FEINDEF

The aunav.NEO, the only explosive ordnance disposal robot with variable geometry, to be exhibited at MILIPOL (Paris) from the 19th to the 22nd of October and at FEINDEF (Madrid) from the 3rd...